For those of you who want to have a general idea on the trip we take in Thailand, here is a basic idea of what we want to do: 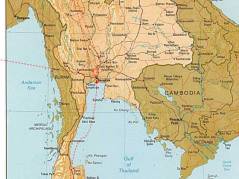 11/02/2007
We'll leave from Frankfurt Airport at 22h10 on Friday evening with Ethihad Airways flight EY8. For the trip from Nürnberg to the Airport we have a Rail-and-Fly ticket, but this could become a problem as the German train drivers are currently on strike. So we also made a reservation for a car, just to be sure :(

11/03/2007
We have one stop in Abu Dhabi (airport site), were we will arrive at 07h10. There we fly out again two ours later at 09h10 to Thailand with Ethihad Airways flight EY408.
We'll arrive at the new Bangkok International Suvarnabhumi Airport (BKK) at 18h25. Due to the timezones we'll then be traveling over 18 hours. The time difference is 6 hours.

We take the Airport Express Bus to Koh San Road, where our hotel (Hotel Royal) is just around the corner. We will probably be very tired, so no long nights in Bangkok

11/05/2007
We spend the day in Bangkok, doing the stuff we did not do the day before. If we are ready for it we'll take the train to Ayutthaya, a word heritage with lots of old dynasty temples.
Because we arrive in the evening we have to find a hotel or guest house in Ayutthaya.

11/06/2007
We will spend the day in Ayutthaya and hopefully see a lot of cool stuff (Info, Info on storing luggage).

In the evening we'll take the night train further to Chiang Mai, where we'll arrive in the morning

11/09/2007 - 11/11/2007
We want to take a hiking tour in the Mountains around Chiang Mai, there should be a lot of tours offered from Chiang Mai.
Site of Wayfarers Hiking
Real Travel Chiang Mai - Things to do
Chiang Dao Nest Tours & Trekking, very interesting tour 3 days 2 nights

11/12/2007
We have to take the night train back to Bangkok and from there the plane to the south - Krabi.
We will arrive in Krabi somewhere in the evening and have to take the ferry to the island of Koh Lanta

11/20/2007
We have to take the flight back to Bangkok and spend the last two days in Bangkok (shopping).